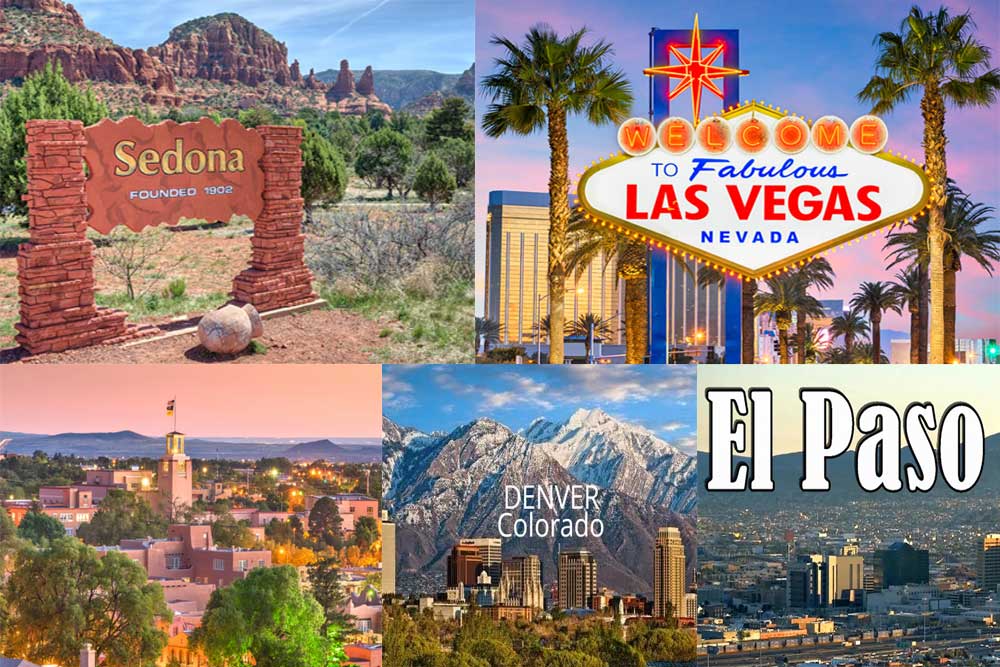 Media depicts the southwest as a place of deserts, abandoned towns, cowboys, and tumbleweeds. We’re long past the days of John Wayne. There are many sights to see in the Southwestern region of the United States, stretching from Texas to Nevada. Here are five great cities to visit on your journey.

Sedona is an Arizona desert town near Flagstaff that’s surrounded by red-rock buttes, steep canyon walls and pine forests. It’s noted for its mild climate and vibrant arts community. Uptown Sedona is dense with New Age shops, spas and art galleries. On the town’s outskirts, numerous trailheads access Red Rock State Park, which offers bird-watching, hiking and picnicking spots. It’s also a popular spot for those interested in new age religion and paranormal experiences, since the area is rumored to be at a pivotal intersection of ley lines and people have claimed to have experienced various phenomena in the area.

Welcome to the City of Sin! Well, these days, there are things for people of all ages to do in this infamous city. Las Vegas, often known simply as Vegas, anchors the Las Vegas Valley metropolitan area and is the largest city within the greater Mojave Desert. Known for its casinos, showgirls, nightlife, and a long history intermingling with organized crime, Vegas has perhaps the most wild character of any American city.

Santa Fe, New Mexico’s capital, sits in the Sangre de Cristo foothills. It’s renowned for its Pueblo-style architecture and as a creative arts hotbed. Founded as a Spanish colony in 1610, it has at its heart the traditional Plaza. The surrounding historic district’s crooked streets wind past adobe landmarks including the Palace of the Governors, now home to the New Mexico History Museum. While not the wild nightlife location of Vegas and not the spooky psychic-time fun of Sedona, Santa Fe has its own warm and rustic charm.

Most people mistakenly think that Colorado is farther north than it is, so Denver isn’t often included among must-see southwestern cities, but alas, it is in the southwest and an important place. This American metropolis dates to the Old West era. Larimer Square, the city’s oldest block, features landmark 19th-century buildings. Museums include the Denver Art Museum, an ultramodern complex known for its collection of indigenous works, and the mansion of famed Titanic survivor Molly Brown. Denver is also a jumping-off point for ski resorts in the nearby Rocky Mountains.

Known as the “Sub City” thanks to having sunshine over 300 days in any given year, El Paso is the place for anyone looking for hot weather, delicious Tex-Mex food, and a fondness for tales of the wild-wild west. El Paso was the city people came to visit to watch the Mexican Revolution play out just over the border in Juárez in 1911. IT’s also considered one of the ten safest cities in the United States, which means you’ll probably be tempted to take a look at El Paso Houses for Sale if you’re passing through on a business trip or on your next vacation.

The Basics of Starting and Running a Fashion Business

My experiences with my son: How to make learning enjoyable?

Important Things To Keep In Mind Before Getting Contact Lenses

Leading Plumbing Services for Offering a Range of the Fixations